National Day of Prayer on Thursday, May 3rd 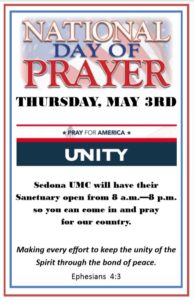 Prayer brings people together. Prayer builds bridges. Prayer reminds us that we are created in God’s image and He desires for us to represent Him everywhere we go. Prayer brings UNITY.

Ephesians 4:3 challenges us to mobilize unified public prayer – “Making every effort to keep the unity of the Spirit through the bond of peace.”

We can come together in clear agreement that this is our greatest need. We can become a visible union, standing together in prayer. We can pray more than ever before, and practice extraordinary prayer for the next great move of God that will catapult the message of the gospel nationally and internationally.

“There is no great movement of God that has ever occurred that does not begin with the extraordinary prayer of God’s people.” Dr. Ronnie Floyd.

Sedona United Methodist Church will open the sanctuary on May 3rd from 8:00am until 8:00pm for you to come and pray.

Additional opportunity to unite in prayer is with an interfaith service at Sedona City Plaza, 102 Roadrunner Dr., from 12 pm to 1 pm. Several pastors from the area will be there including our own Pastor Fred Mast.