September Did you Know? — The Cross went up in Flames. 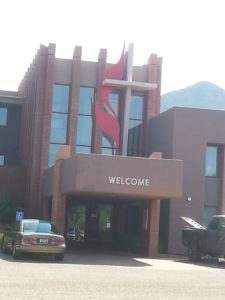 The Cross went up in flames….the United Methodist flames.  The Trustees worked very hard to install the flames on the cross.  This has been a project in the works for some time and has finally come to fruition.  Thank you Trustees!

Following more than two dozen conceptualizations, a traditional symbol—the cross—was linked with a single flame with dual tongues of fire. The resulting insignia is rich in meaning. It relates The United Methodist church to God through Christ (cross) and the Holy Spirit (flame). The flame is a reminder of Pentecost when witnesses were unified by the power of the Holy Spirit and saw “tongues, as of fire” (Acts 2:3). 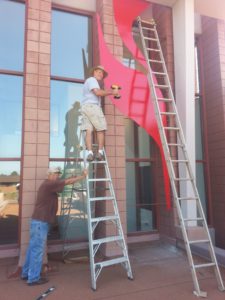 The elements of the emblem also remind us of a transforming moment in the life of Methodism’s founder, John Wesley, when he sensed God’s presence and felt his heart “strangely warmed.” The two tongues of a single flame may also be understood to represent the union of two denominations.

The insignia, one with lettering and one without, was formally adopted by the General Conference in 1968 and registered in 1971 with the U.S. Patent and Trademark Office. Since 1996, the General Council on Finance and Administration (GCFA) of The United Methodist church has supervised the emblem’s use.”